National Symposium: Combating violence and harassment in the workplace 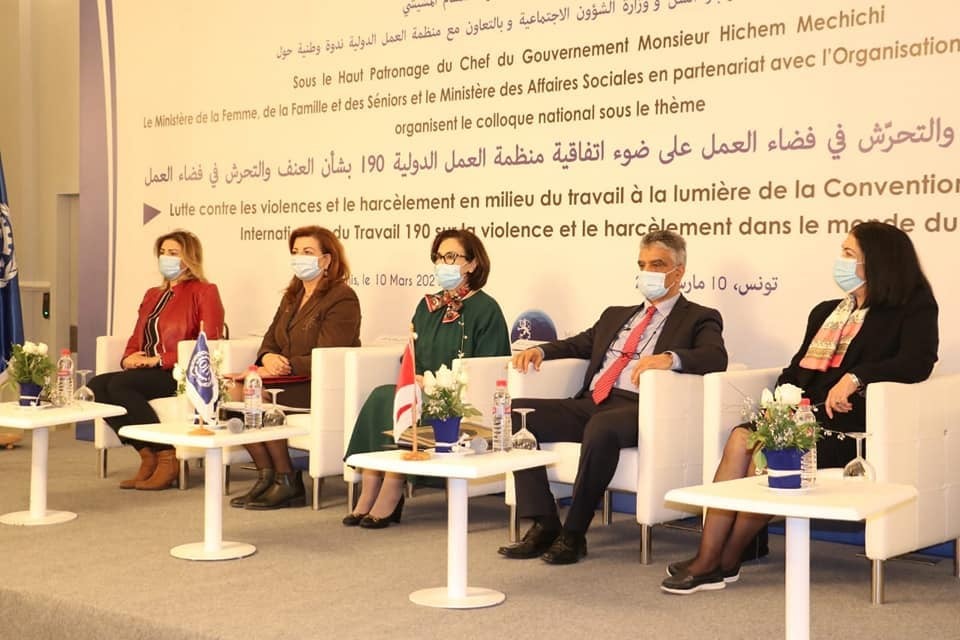 On the occasion of International Women's Day, a national conference was held with the participation of representatives: from the Ministry of Women, the Family and the Elderly, the Ministry of Social Affairs, the Union Tunisian Trade, Industry and Handicrafts, the Tunisian General Union of Labor, the Tunisian Union of Agriculture and Fisheries, as well as representatives of the office of the International Labor Organization .

The fight against violence and harassment at work was at the center of this national colloquium organized by the Ministry for Women in the light of the International Labor Convention No. 190 concerning violence and harassment at work, this colloquium s' part of the “Decent Work for Women in Egypt and Tunisia” project which has been implemented since 2018in partnership with the International Labor Organization.

Opening the seminar The Minister for Women Ms. Imen Hwimel explained that a draft charter on the fight against violence and harassment in the workplace as well as a national strategy for prevention and protection had been prepared and that 'it had been presented to the various parties concerned, including the interministerial council, and promised to continue the dialogue and deepen consultations on this subject in order to submit it to the National Council for Social Dialogue.

In her speech, Ms. Leila Belkhiria Jaber President of the Union of Female Employers in Tunisia reiterated the total commitment of the National Chamber of Women Entrepreneurs for the establishment of a mechanism to prevent and fight against all forms of harassment and violence in the workplace and drew attention that economic violence is as important as physical and moral violence because depriving a woman of a recruitment to a position or of a hierarchical rise or equal pay generates heavy social and economic consequences and further widens the gap of unequal opportunities between men and women.

This meeting also allowed the presentation of the main results of the analysis of the gaps of Convention 190 in Tunisia which once again raised as a recommendation the need to harmonize the Tunisian jurisdiction with the international conventions in the matter.